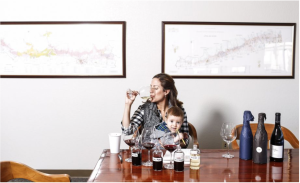 “The identity of a California winemaker has never been more complicated,” asserts the San Francisco Chronicle article crowning Shared Notes winemaker Bibiana González Rave 2015 winemaker of the year. The idea of estate winemaking has increasingly become just that—an idea—for an emerging generation of independent winemakers who hire out to those who can afford vineyard property, and who devote every spare minute outside these “day jobs” to building their own wine brands.

As consulting winemaker for Pahlmeyer, driving force behind her own labels Cattleya and Alma de Cattleya, and equal partner with Jeff Pisoni in Shared Notes, Bibiana exemplifies this modern vintner, personifying “what a California winemaker in 2015 can be.” Among many things, this exemplary California winemaker happens to be a mom, an immigrant and, in Jason Pahlmeyer’s estimation, “a genius.”

From a pre-dawn jaunt to the Wayfarer Vineyard near Fort Ross to the Santa Rosa Shared Notes winemaking facility to a Napa Valley visit with the Pahlmeyer family, the article follows Bibiana as she criss-crosses Sonoma and Napa counties tending vines, tasting wines and applying her clear vision for what California wine should be.

“Her radicalism is to reject polarization,” the article declares, praising Bibiana’s wine for the welcome space it occupies between the expansiveness of the Golden State and the orthodoxy of European winemaking. “She is an accomplished winemaker, crafting outstanding wines that speak of their place, firmly rooted in the lessons she learned in French cellars while reveling in the wild freedom that California affords.”

Her classical training in some legendary French vineyards carries through in her dedication to being both grape grower and winemaker. “She is so connected to the vineyard,” says Anne Moller-Racke, manager of the Donum vineyard that supplies grapes for Cattleya. “That’s something a lot of people say, but for Bibiana it’s really true.” She stands defiantly against winemaking fads as well, insisting that “rich, velvety wines can still be balanced.” Or rejecting the trend to pick fruit ever-earlier to create low-alcohol wines.

Bibiana forges “her own independent path stylistically.” She claims this has everything to do with being Colombian. The Chronicle praises it as refreshingly and promisingly Californian.