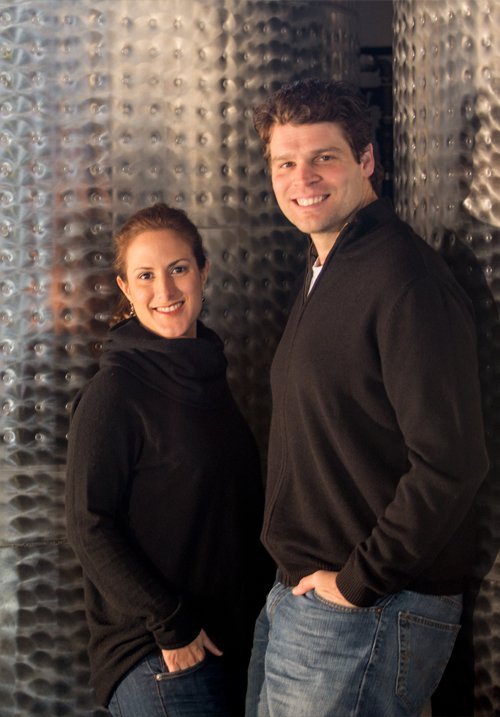 A Project of Married Winemakers

Many winemakers say that their job is to simply usher the grapes through the process of fermentation and into the bottle. But even a winemaker who focuses on minimal intervention has hundreds of decisions to make along the way.

There are decisions to be made in the vineyard, questions of when to pick, whether to destem or whole cluster, whether to use stainless steel or oak and so much more. And talk to any winemaker and you will find that while they are always learning and willing to experiment, they are also very confident in the choices they made to create the final product.

It is this confidence that can lead to differing opinions when two winemakers work together. And add to the mix when the winemakers are married to each other. Sounds like the possible making of a disaster but instead it has resulted in the Shared Notes between Bibiana Gonzales-Rave and Jeff Pisoni.

Jeff Pisoni is the son of Gary Pisoni, the visionary who first planted Pisoni Vineyards in the Santa Lucia Highlands in 1982. Jeff grew up immersed in the family farm and vineyards and knew from an early age that he wanted to work in wine.

Jeff and his brother Mark both followed in their father’s footsteps, Mark studying agricultural economics and taking the role of vineyard manager and Jeff studying enology and becoming the winemaker.

After working at other wineries, including Peter Michael and Bernardus, Jeff joined his family and today is responsible for making the single Pinot Noir under Pisoni Family Vineyards, eight different wines under the Lucia label and a single rosé wine under the label Lucy.

Bibiana González Rave was born and raised in Columbia, in South America, far from any life in the wine industry. Yet, since she was 14 years of age, she knew what she wanted to do. This was very rare for someone from Columbia as there are no vineyards in Columbia. Located near the equator, Columbia is a tropical country with no seasons and therefore the climate is not suited to growing grapes.

But, Bibiana tasted wine and was fascinated by the product and its role in culture and our history. She moved to France to study and worked at Château Haut-Brion, La Mission Haut-Brion in Bordeaux, Domainer Stephane Ogier and Domaine Clusel-Roch in Côte-Rôtie.

Bibiana moved to Sonoma in 2004 where she worked at La Crema, Peay Vineyards, Au Bon Climat, Qupé and Lynmar Estate, where she was the head winemaker for three years.

In 2012, Bibiana started her own label, Cattleya, where she makes five site-specific wines. Honoring her heritage, Cattleya is the national flower of Columbia. She created Alma de Cattleya, a line of six wines which represent the purity of grape varietals in their specific viticultural areas at affordable prices.

In 2005, while working at Peay Vineyards, Bibiana met Jeff, who was making wine at the same facility and they became friends. In 2006 and 2007, Bibiana traveled to South Africa to work harvests in South Africa at Soronsberg Cellars in the Tulbagh region. Jeff also traveled to South Africa to work harvest and the two continued their friendship. In 2007, Bibiana wanted to move to Sonoma so she reached out to her friend Jeff. About that time, they started dating, eventually got married and now have two children.

For years, Bibiana and Jeff were asked if they collaborate when it comes to making their wines. While they would discuss enology, they never critiqued the other’s wines. But, being so busy with their own wines and with two young children, they wanted to do something together and thought, why shouldn’t they make wine together? Since they both make Pinot Noir, they wanted to make a wine that neither had particularly strong opinions already established. They both like Sauvignon Blanc and selected that variety to create Shared Notes.

Shared Notes consists of two Sauvignon Blancs, Les leçons des Maîtres (lessons of the master) and Les Pierres qui Décident (the rocks that decide), made from fruit sourced from the Russian River.

Les Leçons des Maîtres is a Bordeaux-style and is a blend of 76 percent Sauvignon Blanc and 24 percent Semillon. The wine is fermented and aged in 60-gallon 100 percent new oak barrels.

Les Pierres Qui Décident is a Loire Valley-style Sauvignon Blanc and is made from 100 percent Sauvignon Blanc fermented in puncheons (500-liter barrels) for a super aromatic wine with notes of grapefruit and guava and delicate acidity.

Bibiana and Jeff work together throughout the entire process of making the wines of Shared Notes. From the vines to the winery, they discuss ideas and taste samples to make their ultimate decisions.

I asked them, do they ever disagree? They told me that the first year they made Shared Notes, they had a conversation about filtration. In Bordeaux, the wines are filtered and Bibiana wanted to follow that model. But because they do not filter the wines for their own labels, Jeff didn’t want to filter. They discussed and came to an agreement not to filter in order to maintain the complexity, integrity and purity of the wine.

Bibiana and Jeff push each other a lot. They challenge each other but they also communicate and collaborate. And Shared Notes is the beautiful result.